Because the world is ruined, it can be rebuilt.

Because we can die, we can change.

Because the past is dead, we may finally have a future.

What if D&D's approach to history and divinity was the exact opposite of reverential?

GODEATER is a serious attempt to build a game that can do everything D&D does, but is nevertheless resolutely not D&D in a funny hat. It is a game about problem-solving and tough choices, in a world littered with the cavernous bodies of dead deities. It combines some of the sensibilities of the OSR school of gaming with more up-to-date mechanics and a focus on characterisation. It also includes an intuitive magic system based around control and communication of elemental spirits, and an attempt to build a world a little beyond generic fantasy and all of its unfortunate implications.

The Core Rules are simple enough to fit onto three pages, but the included document packs in fifteen pages worth of additional content: Details about the world, a guide to GMing, six fully-detailed Gods to explore and devour, and a selection of items, threats and general weirdness for you to include in your campaigns. Hack it, mess with it, do whatever you want. I’m not your dad.

More stuff may be forthcoming for this system – adventure modules, more items and character cards, and so on – if there's any demand for it!

In order to download this game you must purchase it at or above the minimum price of £5 GBP. You will get access to the following files:

>More stuff may be forthcoming for this system – adventure modules, more items and character cards, and so on – if there's any demand for it!

I demand! I demand! 🤓 I would love additional character cards and perhaps an example God-setting.

Picked this up, I like the concept a lot. I'd like to see a sample adventure, or the lore of the world a little more fleshed out to help me frame these concept a little clearer in my head. It's cool though, I like it

Hi! I'm super excited to play this game. I was wondering about why it's classified as LGBTQIA. I have some ideas of my own as to why, but I was hoping to speak with you about what makes it a queer game. I'd hate to put words in your mouth.

Thank you for this game!

hwaaaah i really like the god descriptions of this one

My purchase didn't go through and I don't know how else to contact the creator.

Godeater, of no relation to the psp game/anime/soulslike spinoff, is a mildly crunchy osr dungeon crawler with a lot of cool mechanical innovations. It's 14 pages, and feels a bit like Into The Odd in that it pares the genre down to the bone and then starts fresh from there.

The mechanics are 2d10 against target number, with your attributes being pools that you can spend to boost your chances of success. For the most part, nothing rolls against you, so an enemy attack is simply a defensive roll on your part. This mix of limited resources and streamlined rolling keeps the game tight and tense.

There are also a few neat little mechanical flourishes. The Retirement mechanic from Dread (not the Jenga one) is here, as are Tags from PbtA, as are Arcana from Into The Odd, and HP is simplified down to four wounds per character.

There's also a fairly standout system for magic. Anything you aren't doing via artifact comes from a direct negotiation with a god or powerful terrestrial spirit. Essentially, you in-character offer stat points or services, and depending on your offer and the god's nature, it might accept.

Character advancement is largely feat-based, although the feats can fundamentally alter just about any part of the character. Even so, they're interesting and flavorful and feel like they allow characters to grow in noticeably different directions.

The rules being the absolute first thing in the book, with no context or setting flavor, does create an extremely blunt first impression, but it's worth getting past that. Setting-wise, Godeater is a mix of Into The Odd and The Nightmares Beneath. Gods are broken, corrupted things, and their bodies are intruding on the world as planes and dungeons.

There's an elegaic, gothic Dark Souls vibe, but the overall direction is more energetic, direct, and I think I'd call it godpunk or dungeonpunk instead.

For only 14 pages, there's a lot packed in here too. In addition to the full rules, there's several optional player races, crunchy character advancement, a bestiary, item and arcana lists, and a really excellent GM's guide. It's very full.

Overall, despite some roughness to its first impression, this is an extraordinarily solid game. If you like osr, atmospheric settings, light but crunchy rules, and a best-of-all-worlds approach to design that grabs the best elements from a dozen different sources, I would highly recommend grabbing a copy of Godeater.

This game is super cool!!! I'm planning on getting a game together at some point but it seems really cool so far!!

How do players determine their ability pools and expertise?

The players roll 2d6 for each stat (so 3 times) and then choose which stat they want to have as their highest/lowest. Similar to DnD where you roll your ability scores and then decide which skills get which. For expertise you get 0, 1, and 2 so you have to choose which ability to give the 0 in Expertise to, which one the 1, and which one the 2.

Very interesting , hits on a lot of topics I find super intriguing and that I have trouble finding anything else that even gets close to scratching that itch. Look forward to trying it out. I think that maybe some more examples of what one actually finds inside of a god in terms of scenery would be helpful, but on the other hand leaving it open maybe lets the mind fill it out for you. I do think that page 6 would be better if moved to be the first page, as reading the rules without any info on the context they exist in was a bit confusing. 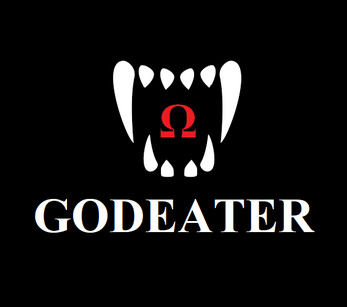 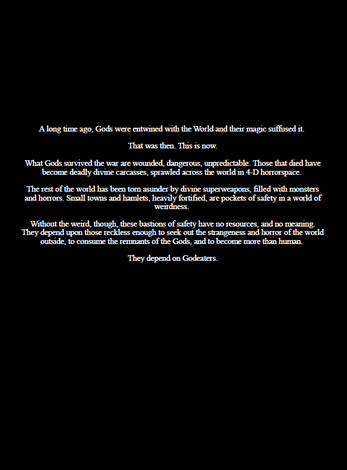